Desjardins Group and its dynamic CEO have seized the moment.
The time for cooperatives is now.
Now, when credit gridlock and near collapse of the global financial network are still vivid in memory. Now, when fears and passions bring people to march the highways, camp in tents in public squares and go hungry to get a meeting.
Now, when the powers that be and people in the street could use good news about sustainable development on a sustainable planet, now is the time to press for cooperative economic and social enterprise.
Desjardins isn’t waiting. Canada’s largest member-owned credit union and the biggest financial institution in the country after the Big Five banks is emerging from its large and solid base in Québec to launch itself into the fastest growing markets in the rest of Canada and onto the main stage of the global cooperative movement.

Monique Leroux is determined to position co-ops front and centre when new and improved ways to manage the economic system are being decided. “What the cooperative model brings is really a connection of people and the economy,” she says. “The cooperative model emphasizes the importance of the equilibrium between human capital and financial capital.”
Reappointed last March (2012) to a second four year term as Desjardins’ chair, president and CEO, Ms. Leroux came to the top job at Canada’s largest co-op shortly before Lehman Brothers filed the biggest bankruptcy in history. What followed was the global financial crisis of 2008, big bank bailouts, deep and prolonged recession, car company rescues, soaring American joblessness and Europe’s sovereign-debt crisis. 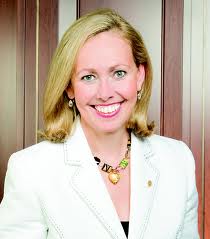 Through these serial overlapping cataclysms Ms. Leroux, a management black belt disguised as tinkerbell, steered Desjardins with sure and steady focus. Total revenues rose from $8 billion in 2008 to $13 billion in 2011. Assets on her watch grew from $152 billion to $190 billion. Pre-tax operating income soared to $2 billion from a scant $186 million in 2008 when Desjardins had to write off more than a billion dollars of debt acquired prior to Ms. Leroux’s first term. Now, with the company on course, she’s got a second wind. First she’ll take Alberta. Then she’ll take the world.
Always up for a challenge, Ms. Leroux thought she might be a concert pianist, studied at the Conservatoire de musique du Québec while growing up in a suburb of Montréal, but switched to business, became an accountant, the first female consulting partner at Ernst & Young, VP at the Royal Bank, and had a stint at troubled printing and media giant Quebecor, before joining Desjardins in 2001. She’s hovering just under 60 but appears closer to 40.
In her expansionist ambitions she channels the company founder, whom she captured in a compilation of quotes and thoughts published last year as Alphonse Desjardins: A Vision for Today’s World. The company has never been a stay-at-home. In over a century of operation, starting as a small credit union (caisse populaire) in Lévis, across the river from Quebec City, it has assembled several outposts away from its provincial core, mostly to serve communities with significant French Canadian populations in Manitoba, New Brunswick and Ontario, but also in New England. In 1908 Alphonse Desjardins himself formed the first credit union in Ottawa, where he worked for a quarter century at the House of Commons. He helped draft legislation governing co-ops in Massachusetts and New York, was invited to a co-op conference in Washington by President Taft and is generally acknowledged to be the founding father of the North American credit union movement. The company has three branches in Florida today to serve Quebec’s snowbirds. Most of these initiatives have been relatively easy targets of opportunity primarily serving francophones.
Further afield Desjardins has a distinguished forty year history as one of the world’s leading microfinance providers. It anchors a network of microcredit unions operating in 2,500 locations in 30 developing nations. With a modest budget of about $20 million annually, it oversees a structure serving some nine million clients with total deposits of about $2.5 billion and total loans outstanding about the same amount. The average loan is for just over $500. This is not a business. It’s an NGO and its culture is different. Its funding is different, arriving from CIDA and other aid agencies. It’s different from Desjardins, but not unconnected. The substantial commitment Desjardins makes to community and social development is not unconnected to its long range development objectives.
The Blueprint for a Cooperative Decade that the International Cooperative Alliance (ICA) delivered at a United Nations ceremony in New York late last year challenges co-ops to become “the fastest growing form of enterprise” by 2020. Ms. Leroux was there to brief the UN on how the International Year of Cooperatives (IYC) had gone. She had much to do with IYC in 2012 and with kicking off the “cooperative decade” running to 2020.
“At Desjardins,” she says, “we are committed to creating new ways to spur growth and innovation every day to aid the development of the cooperative movement.”

In fact Desjardins is taking one of the seven basic principles of cooperation to a higher level. That would be Principle Six, Cooperation among cooperatives. “Cooperatives serve their members most effectively and strengthen the cooperative movement,” says the principle, “by working together through local, regional, national and international structures.” Desjardins is emerging as the most cooperative co-op anywhere. It designed and delivered one of the peak performances of IYC, the International Summit of Cooperatives in Québec City in October 2012. It’s said this conference cost $10 million to produce, a number the company concedes is in the ballpark. Even with the $1 million sponsorship cheque presented by the feds with much fanfare, another $1 million from the province, counting minor sponsorships and revenue from ads and showcases and assuming that a good slice of the 2,800 participants paid full entry of $1,700, there’d still be a significant shortfall. Not only did Desjardins suck that up, it’s expected to do it again in 2014. At a board meeting during its AGM at Manchester late last year, ICA endorsed the repeat summit and reported that “Desjardins is moving forward positively on a follow-on in Québec City in October 2014.” It’s not farfetched to suggest that a successful second Summit has potential to develop into a biennial world leadership forum, a Davos for co-ops in Québec’s capital, a stone’s throw from where the movement had a start in Canada and historic birthplace of the nation itself. If the reality comes anywhere near the vision, it may be a sound investment indeed.
At the UN’s IYC closer, ICA presented two documents. The first is the co-op decade “Blueprint” with its ambitious plan for the co-op business model to become the “acknowledged leader in economic, social and environmental sustainability (and) the model preferred by people,” as well as the fastest growing, by 2020. Dame Pauline Green, president of Geneva-based ICA, chaired a five person work group to help prepare this seminal document. A member of the group was Stéphane Bertrand from Desjardins, who also serves as executive director of the Cooperative Summit.
The second document presented to the UN was the World Cooperative Monitor, a fresh cut at statistical analysis that reveals the largest 300 co-ops in the world have a joint annual “turnover” of $2 trillion (Desjardins is the largest of a handful on the list from Canada). That’s about 20% higher than Canada’s annual GDP. On the international steering committee for the Monitor, which is being produced in Italy, is Éliane O’Shaughnessy from Desjardins, who is “strategic advisor” in Ms. Leroux’s office.